Skip to content
07472 398823 (Phone)
News
Stapleford Parish Council > News > Uncategorized > SAVE OUR GREENBELT – join the village demo on the Rec on 3rd June and write to council leaders and the GCP now!

The Greater Cambridge Partnership (GCP) intends to carve a tarmac busway 14m wide through greenbelt around Stapleford and Shelford, one of the most beautiful landscapes in Cambridgeshire and adjacent to Magog Down.

A preferred route has been selected and detailed plans exist for a busway which runs northwest from a tarmac monstrosity of a new park-and-ride near the A11-A1307 interchange straight through Stapleford’s greenbelt and on towards the Biomedical Campus. And on the back of this, speculative housing will be released on fields dissected by the busway. 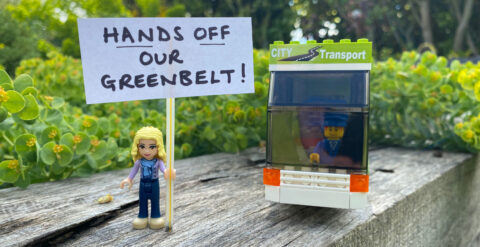 Your countryside needs you! Join our village protest against this scheme on 3rd June and urge council leaders to STOP, THINK & CHANGE before it’s too late!

Whether you want a busway or light rail along the old Haverhill railway line, a bus route along the A1307 or in the future a pod direct to John Lewis, please come along to show your support. This is not about being anti-change or NIMBYs. This is about supporting the right route for the right transport mode, ensuring that our village is served rather than vandalised by it, and giving taxpayers proper value for money. Moreover, in the face of a climate emergency, a sustainable public transport solution is needed.

The situation is now urgent. There is a very real danger that the GCP will simply continue unopposed with its Cambridge South East Transport scheme (CSET). The GCP Joint Assembly, which advises the Executive Board, is meeting on 10th June. Then, on 1st July, the GCP Executive Board will decide whether to apply to the Secretary of State for a Transport and Works Order. If granted, this would give the GCP the powers it needs to:
• construct a busway through Stapleford’s greenbelt
• compulsorily purchase land
• close roads and paths
• build a 2,000-space park-and-ride.

There is no time to be lost in making our feelings known. Stapleford Parish Council aims to influence decision makers and attract media coverage via a peaceful demo on Thursday 3rd June. The plan is to meet at Stapleford Rec at 10am and then process the short distance to where the busway is due to cross Haverhill Road, where we will gather for photos, filming and interviews. The BBC has indicated interest in the event and work is going on behind the scenes to secure the attendance of various local, District and County Councillors.

We will have banners to hand out (but feel free to bring your own too), marshals to ensure our safety and will comply with Covid guidance.

If you hope to come along, please let Howard Kettel know so we can manage numbers on the day (hkettelstaplefordpc@gmail.com).

How you can help? Write immediately to councillors on the GCP Board. Even if you can’t join the demo, you can still help. Recent local elections have changed the make-up of the county’s decision-making bodies, including the GCP. New Board members have only days to get up to speed with the unsustainable and uneconomical nature of CSET before they must vote on its future. So, we’re asking everyone to please, please, please write ASAP to the following council leaders and GCP Board members to register your concerns:
• lucynethsingha@icloud.com
• elisa.meschini@cambridgeshire.gov.uk
• lewis.herbert@cambridge.gov.uk
• Dave.Baigent@cambridge.gov.uk
• Cllr.BridgetSmith@scambs.gov.uk
• cllr.gough@scambs.gov.uk
• nik.johnson@cambridgeshirepeterborough-ca.gov.uk

Thank you in advance for your support and we look forward to seeing you on Thursday 3rd June.