Overview
• On 18th January 2021, Stapleford Parish Council was invited by Greater Cambridge Shared Planning Service (GCP) to comment on its Draft Conservation Area Appraisal and Management Plan for Stapleford.
• Proposals appear to earmark around 20% of the existing Conservation Area for exclusion.
• The draft appraisal is open for comment from until Monday 15th February 2021.
• The Parish Council will be submitting its own thoughts and encourages individual parishioners to do the same.

Houses here are large and distinctive, set back from the curving streets in big, well-spaced plots and enclosed by tall hedgerows and mature trees, many of which are protected. Kerbs are composed of traditional materials, verges are green, and long views extend from the churchyard and between houses across rising chalk downs to the north. Small heritage assets include traditional signposts, the village sign, post box and railings.

Landmark buildings and key views within Stapleford’s Conservation Area include St Andrew’s Church, Johnson Memorial Hall, 25 Church St, and views east and west along Mingle Lane from the Church and towards the Church from Gog Magog Way.

Is development permitted within the Conservation Area?
Although Conservation Areas have some extra planning controls and considerations, these exist to protect the historic and architectural elements which make a place special. They are  most likely to affect owners who want to work on the outside of their building or any trees on their property.

Development is generally limited to domestic extensions. A particular challenge to the Conservation Area is the subdivision of existing large plots or replacement of existing houses by new ones. Any such new development is required to be set well back from the street and adhere to the scale of existing development, whilst contributing to the strongly sylvan quality of the area.

Despite the length of GCP’s draft Conservation Area appraisal, its proposed changes are mentioned only at the very end of the document and no explanation is provided for excluding the aforementioned tracts of land other than that they do not meet the criteria
for Conservation Areas set out in national legislation. Based on a map within the document, the Parish Council estimates that around 20% of Stapleford’s existing Conservation Area is earmarked for exclusion, as the figure below illustrates. 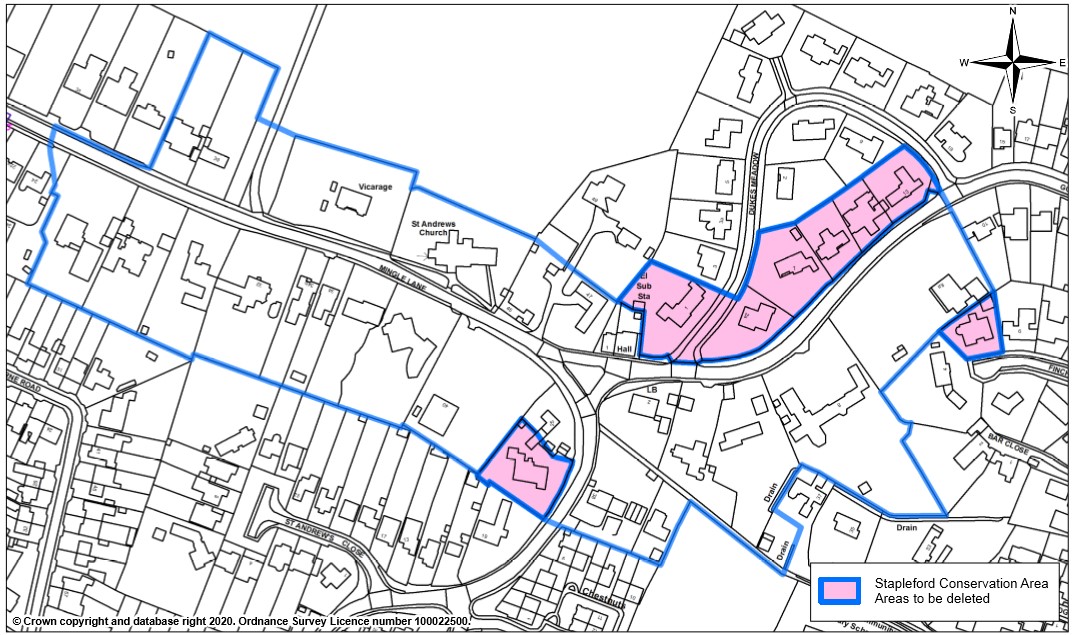 Building owners affected by the boundary changes will be informed by GCP.

Where can I find out more and how can I comment?
The draft appraisal is open for informal comment (this is not a statutory consultation) from 18th January to 15th February 2021. All comments received will help to shape the final document which will be put forward for adoption.

The consultation itself is very straightforward to answer and is available here.